March 11, 2017 – St. Patrick’s Day Parade
We will meet Saturday at the LDS Church parking lot on Water St. and Ocean Ave. at 8:30 AM. The parade begins at 10:00 AM. Our entry number is 28.  Please enter Water St. via Major Ave, which is accessible from Boulder Highway or East Van Wagenen St.  On the parade route do not throw candy or objects from vehicles.

April 1, 2017 – Club Dinner and Social at the Hush Puppy restaurant We will meet at 5 PM at the Hush Puppy, 7185 W. Charleston. Please drive your classic cars if you can. There will be a section blocked off for us in the parking lot. Dinner is on you via cash or a personal check.

On March 4th we had our 3rd annual car show at Las Ventanas Senior Community. The weather cooperated and the turnout was great.
We had cars from the 30s all the way to a modern Roush Mustang Convertible. There was a Corvair pickup truck which was ﬁxed up very nice. The side door/ramp on the right side of the bed was a big hit with people.
Las Ventanas always treats us very well when we show our cars. They had coﬀee, soda, cookies and a box lunch for us. The staﬀ is so appreciative that we take the time to bring our cars. (Of course, we have as much fun showing them oﬀ)
The residents, who we really do this for, had a really great time and many of them remembered owning some of the cars we were showing. Some even shared stories about the cars they used to own.

Activities VP Sandra Foster asked Co-host John Pendergast to talk about the tour to Sheri’s Ranch. He said that it was a well-attended event and was sure that everybody had a good time. Nineteen members were there and everyone stayed for lunch at Sheri’s. Later several went to the Sander’s Winery close by and some enjoyed a tasting presented by the owner himself. 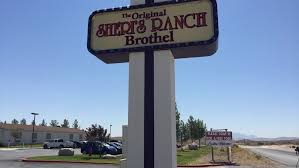 On February 18, 2017, twenty-one of us met at the Cracker Barrel to assess the weather and advisability of traveling to Pahrump, NV to tour the Brothel. Nineteen of us decided to brave the storms and go for it. As it was, there was just a little bit of rain on our way so all was good. One of the staff met us at the door and let us know that two of the ladies would be conducting the tour shortly. Meanwhile, we were invited to have a beverage which some of us did. Very soon the ladies came to get us and we embarked on a tour of an actual working Brothel. Only in Nevada! The ladies were very quick to answer most of our questions and were happy to show us around some of the rooms down the long hallway of working and specialty rooms. The ladies were very informative and polite. After our little tour, we remained in the bar and grill for a light lunch. We were not allowed to take pictures inside the Brothel for obvious reasons but suffice it to say; we were there! Afterward, we went a short way down the road to the Sanders’ Pahrump Valley Winery, where the owner gave those of us agreeable a wonderful wine tasting and history lesson all in one.

LAS VENTANAS CAR SHOW
On Saturday, March 4, 2017, the High Rollers were invited for the third time to enter into a car show at the Las Ventanas Assisted Living Complex. The complex offers all participants food and beverages, a wonderful box lunch, cookies, fruit and live entertainment from 10 AM until 2 PM. It was a beautiful day and many classic cars came out for the event. The residents also came out for the event and since it was such a nice day, many stayed out in the sunshine to look at the cars. Many engaged in conversation with the vehicle owners, talking about their cars from the past and perhaps how one or the other was just like the one they had. One lady even remembered exactly how much she and her husband had paid for their car 70+ years ago. It is great to see the residents have a good time sharing happier days and memories with us. We hope this will continue to be a yearly event for both us and them.

TENTATIVE ACTIVITIES LIST FOR 2017 HIGH ROLLERS CHAPTER OF THE VMCCA

This is a text widget, which allows you to add text or HTML to your sidebar. You can use them to display text, links, images, HTML, or a combination of these. Edit them in the Widget section of the Customizer.